Virginia Adventures XI - A lack of time and space

We were supposed to close on 12/22, and have 2 weeks to sort everything out for the move. Due to a snafu (The appraiser for the buyers put down it was a private road, when we actually live on a public road, and that screwed things with the VA) the closing was pushed back to 12/28.

That gave us a week less to do the stuff we needed to do in two weeks.

So, we packed like crazy for the previous week, but still had to leave out stuff to live on. We intended to purchase a canopy on 12/23, that got pushed to 12/29.

Then, we found out, the canopy didn't fit.

So we started to search for one: Used, new, anywhere from Seattle to Roseburg. There was no canopy to be found.

Enter Colvin Ford.  They had a brand new 2020 F350 that, while it had a short bed, had a canopy. So, we traded our 2016 for the 2020 with 3400 miles. The previous owner had rarely driven it, and we're going to put more miles on it in a week than he did in a year. We have provisionally named her Black Betty White (in honor of the great comedian who passed on the day we purchased the truck).

Except the engine light came on.

We had an entire tribe come to help us move every last thing either into the packrat, the dump, or the garage for the truck. Many and eternal thanks to Kal, Nick, my brothers and stalwart loaders and managers; Janeen for helping us pack and clean; Jason for his container tetris skills; Stacy for kitchen duty and packing; Brian, Dallas, and Daniel for their strong backs and arms.  We couldn't have done it without you.

The Jetta had blown a connecting rod. We needed a new engine (luckily it was under warranty). It was a repair that would take months.  We were supposed to leave on the 4th.

So, we lost a bunch of cargo space.  We loaded the truck, and found out we couldn't get hardly one half of the stuff we needed to get into it.

We thought and thought, and left some stuff with a friend, but there were things we needed and we simply could not fit them. We despaired.

Enterprise rent a car to the rescue. A U-Haul to Virginia was Over $4000. A 7 person passenger minivan was about $2000 with unlimited miles. We rented the minivan with fold down seats and filled it to the gills with stuff, including some plants of Paddy's we thought we'd have to leave behind. Renting at PDX we had to drive from Amity to PDX and back.  We returned at 2:30 am for some sleep, and got back going at 7 am for things to do.

So, last issue: our oldest son had tried his best to coordinate with friends to rent an apartment, and finally got everything together on 1/3.  But he couldn't sign until 1/5, and all his stuff had to be out.  He dried to find friends and whatever to store his stuff, but no go. He finally got a Uhaul of his own, to store his stuff over night. Shout out to Brian for helping him load and unload everything.

The last item was loading the Sheep and Llamas. That was a whole rodeo, done in rain and mud and with the cooperation for which all llamas are known. However, everyone was finally loaded, and we got on the road: wet, exhausted, about 5 hours later than we wanted, but on our way.

Popular posts from this blog

Why do we say Holy Ghost?

September 10, 2019
I went down a bit of a linguistic rabbit hole today. One of the FB groups I’m on posted “Why do we say Holy Ghost? Is it a ghost?” After the first minute of smacking my head, I started really looking into the question. Ghost is an English word of Germanic origin, which is used to translate spiritus from latin into old English. It’s first used in Old English as such: sē hālga gāst is Old English for “The Holy Ghost”. Spirit didn’t enter English as a translation for spiritus until the Middle English Period (after the Norman Conquest, when the Normans brought more French and Latinate words into English). Ghost and geist are direct cognates, from English and German respectively. Geist has a meaning of spirit in the supernatural sense, as well as the meaning of apparition and of something having a frightening appearance. It also has a sense of furor or agitation, a sort of ecstasy. Thus, a sense of being filled ‘with the Holy Ghost’ carries a sense of ecstatic experience.
Read more 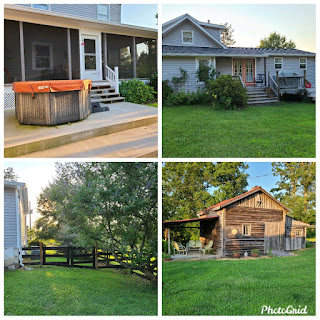 Many of you will have heard, but this will be the official record that we are planning on moving to Virginia sometime this fall.  As I know details, I'll publish them here, but here's what I know so far. Paddy, Bridget our daughter, and I are into farming, and we have 5 acres of steep clay in Oregon. We've been looking for more, flatter land in Oregon, but it's way, WAY outside our price range.  Since the Oregon market is such a seller's market at the moment, we thought we could sell and get a good property elsewhere. So we started casting further afield. We came across a property in Clarksville, VA that was in our price range, and started talking to the community. They embraced Paddy very quickly, and we made an offer on the property. However, our process was just starting, and theirs was advanced, and we missed out on that one.   After that, we took a step back, thought we'd get our ducks in a row, and try again next year sometime.  Then the sister of the owne
Read more

October 25, 2005
A reasonable summary of the concept of the "Egregore" can be found at the following link: http://salemos.tripod.com/index-50.html My question is this: Does anyone share my feeling that Freemasonry has an egregore that is fed by performing its ritual, regardless of the intent of the ritualists? In other words, for those of us that are inclined to find a truly deeper spiritual aspect of our Craft, is there truly a "house not made with hands" that is sustained by the many who regularly perform the ritual, but which - at least on a certain level - is only accessible to those "with eyes to see"? Many people are attracted to Masonry looking for a deeper level of spirituality than they can find in daily life, or in a merely personal, individual search. For many, contemporary Freemasonry is a disappointment in this regard. Yet the power of its symbols & rituals are undeniable. I, however, feel that Freemasonry has an inherent "built in" spiritu
Read more